SuppliersResourcesArticlesNewsJobsEvents
STAY INFORMED
Subscribe to our monthly newsletter.
Your email address will never be disclosed to any third party.
Read our privacy notice. 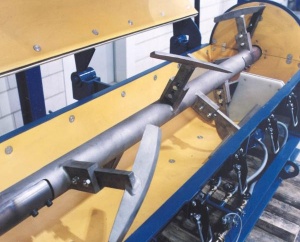 Running Tracks made from Old Tyres

The rubber is crushed and processed as granule or rubber powder. There are two main processing options: on one hand the modification of bitumen and asphalt, on the other hand the production of rubber tracks or rubber sheets.
The latter are used, among others, for footfall sound isolation beneath floors, as injury protection ground coverings for playgrounds, as indoor sports mats , or as outdoor running tracks. The running track in the Berlin Olympic Stadium with its blue hue (at those times unique) instead of the common dark red, for instance, is still positively striking. For this particular track, 23 tons of granule made from old tires were processed.
AVA has delivered mixers for the successful processing of old tire granulate to rubber tracks or rubber sheets in Europe and the US.
AVA in Herrsching is most probably the only company worldwide to execute this processing as batches in AVA Horizontal Mixers Type HTC and as continuous processes in AVA Horizontal Mixers Type HTK.
The challenge is to evenly sprinkle the old tire granulate with a fluid adhesive, and to homogenously mix in even a fluid additive within a very short time. The fluid additive activates the adhesive; subsequently, the mixture is fed into a compactor, pressed, and will only cure right before entering the peeling or cutting section.

The operators all place high value on the cleansability of the mixers since the downtimes are to be held as short as possible. Time is Money.
Apart from special PU-linings of the mixer drum or a PE-foil pasted into the mixer, the figure shows a special design with an entirely folding top.
Additionally, the mixing shaft is split at the ends, and may thus be removed from the machine as one single unit.
A second clean shaft is provided and inserted so that this design allows for a cleansing period reduced to the absolute minimum.